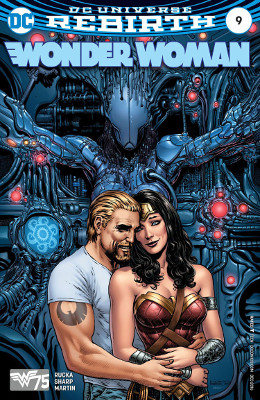 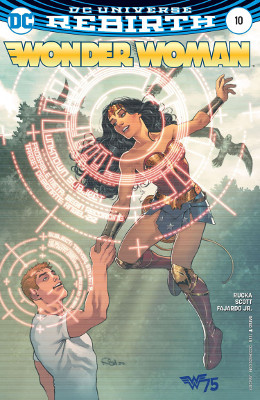 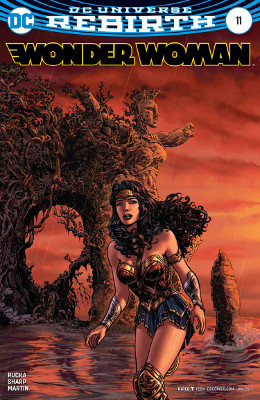 I appreciate that Barbara Ann made good on her deal to help Diana find Themyscira. Though I do wonder what she’s going to do with her life now that she’s not Cheetah or under Urzkartaga’s thumb.

I don’t know who Veronica Cale is, if Rucka made her up for this book or dug her from somewhere else. Rucka is particularly good at the latter. And then giving them more characterization than they ever had.

Sasha making fun of the Urzkartaga plant was pretty solid. (Though I thought it was supposed to remain under the guard of those girls.)

Adored seeing Diana and Etta taking Barbara out shopping. Though you’d think Diana might want to go a bit undercover and perhaps in civilian clothing. I mean, she’d likely get recognized anyway, but perhaps it would take a little bit longer. I love what Etta said about Diana meeting her fans, “She doesn’t do it because she thinks she has to. She does it because she knows what it means to them that she does.” Everything.

Sharp’s mall tributes to other Wonder Woman creators was cheeky.

I’m not sure how I feel about Diana and Steve hooking up. I always really liked Steve and Etta getting together instead. I did love Diana’s talk about love being limitless and her being bad at romance. I feel you, girl, I am terrible at romance myself.

Why is Hippolyta’s hair blonde? Like do they have bleach on Themyscira?

The best scene by far was all of them sitting around, touching the lasso of truth, and not realizing it would make them tell the truth. But pretty cool that it functions as a universal translator. I want this to happen at every dinner.

Etta pointing out that there’s no way Diana would get inebriated off one mall margarita was pretty great.

Once again, Rucka and Scott make a skilled team here to show Diana exploring an entirely new world. Of course, she’d be slightly overwhelmed by the mall. People who grow up with malls have issues with them. At least they didn’t walk her by a perfume aisle! I do love Diana’s fascination and instant friendship with children, and her pointing out that they don’t have children on Themyscira.

When the shooting in the mall happened, I cynically reverted back to thinking about how many shootings there are in America. And, of course, one was bound to happen on Diana’s first trip outside the military base. I kind of wish my brain wasn’t wired for that kind of news. Instead, I just wish I thought about it as a story.

It is fun to see Diana find her powers. I’m glad that Rucka didn’t waste anytime with Diana not knowing she can fly.

Steve was right about the fake Amazonians and fake Hippolyta being pretty awful. Like what were they even wearing? It was so dark and desolate. I do wonder if they were just an awful hallucination from Diana done by some god or some kind of image Diana had of them. And I don’t really understand the motivation behind faking everything.

Etta remains the best. Of course, she figured out that Sasha wasn’t herself. And was actually a robot? Veronica saying that she’d be remembered by Etta someday seemed like a call out to the audience.

Maybe the entire fact that the Amazons were never there was the reason why Cheetah couldn’t find them?