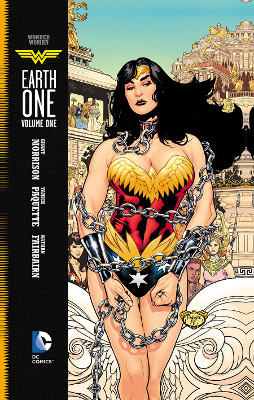 I did not go into this book and expect to like it. It sat on my shelves for months. I even took it on trips with me. (Usually on long flights, I like to break up my prose reading with at least one graphic novel.) Nothing could get me to read it until I suggested it for ladies comic book club.

And then I felt really guilty when no one liked it. (Except one woman, we’ll give Morrison his one fan.)

Before I dive into the writing — which fits my theory that Morrison writes comic books thinking about the graduate school papers that will be written on them — I want to talk about the art. Yanick’s gotten a lot of praise for this book, and for the most part, it’s pretty art. It’s bold. It’s Wonder Woman and on brand. Nathan Fairbairn’s colors give it the primary-colored superhero journey. I particularly adored Etta as the plus-sized hottie with her Texas attitude.

I really loved how Yanick simplified Diana’s first Wonder Woman costume and gave her pants. More artist should look at this and consider that it’s actually somewhat easy to do this. Too many have overthought what she should wear, but Yanick captures it brilliantly.

My one giant beef is the swimsuit version that Etta and the sorority sisters get Diana to wear. Mainly the bottoms look like one big cameltoe waiting to happen. It looks uncomfortable. You cannot tell me that the Amazons shave their pubic hair. I can handwave Western beauty standards as the reason they don’t have leg hair or underarm hair. But Diana would have a big ole bush.

Not to mention that the bottoms just look so uncomfortable.

For the most parts, the layouts and transitions also made for a fun comic. However, there were a few times where the art got more inventive and less helping the reader figure out where next to read or what timeline we are in since the book bounces back and forth a bit.

Okay, time to dig into Morrison’s writing and his imagination of Wonder Woman’s origins, the Amazons, and the changes he’s made to the story.

First on my list is Hercules. I’m a well-known hater of any attempt to give Diana a father. She came from clay, the end. Diana’s mythos works much better when she has no father, because she has no patriarch to influence her. She has no one but her mother and her people. Especially since her mission is to protect women and children and teach the world about love and peace.

The open scenes with enslaved Hippolyta seducing Hercules, her slaver, in order to get her magical belt back was just disgusting. Especially since it’s strongly implied that he’s already raped her and a bunch of the Amazons. Then it’s explicitly assumed when Hippolyta reveals that he’s Diana’s father.

This type of need for trauma — specifically the trauma of enslavement and sexual assault — goes back to the idea about how women cannot be heroes without some kind of horrible thing happening to them. They can’t just decide to save the day. They have to have terrible, dark traumas in their past. Why can’t the Amazons just decide to preserve their lives and have their gods bless them with Themyscira?

Though it feels incredibly uncomfortable that they’d want to relive the trauma of Hercules as part of this day of celebration. Particularly to have Diana, his daughter, wear the mask and hunt her sisters.

Morrison’s Amazons do have some of the similar technologies of the old comics like the purple healing ray and the mirror where they can watch Man’s World. Though Morrison has Hippolyta keep watching Man’s World mostly to herself. Morrison makes the lesbianism that would be part of Amazonian culture more explicit. He continues the recent tradition of Hippolyta and Phillipus having a romance.

Morrison expands this by selecting Diana a girlfriend in Mala. Mala is an odd choice given she’s often shown as the Amazon whose own skills are close in superiority to Diana’s and Diana barely bests her in competitions. Mala seems to be very much in love with Diana. However, it doesn’t show the other way around. Diana doesn’t look at Mala the same way she does Steve.

Speaking of Steve, Morrison follows the newer patterns of writers who believe that the Amazons would kill any man who ever stepped foot on their island. And have no remorse about it. Even if they accidentally crashed and were badly hurt like Steve.

If the Amazons’ message to Man’s World is one about love and peace, how does them wanting to kill all the men not make them the misandrists that misogynists like to claim feminists are? How is murder love and peace? If Morrison himself claims to be a feminist, then how can he not see that tarnishing the Amazons’ moral superiority won’t wreck Diana’s entire mission? That if the Amazons kill men, like they (rightly) believe men do women, then why would they claim a moral and ethical high-ground if they do the same thing?

Sending all those Amazons to kill Steve is irrational. Now having a rule that no man can live there, that’s different. Showing struggles of how to get men the ability to visit, different. But the outright thirst to kill Steve, who’s injured, just because he’s a man is gross. And it plays on misogynists’ fear of women having power. That the more power we have, we’ll use it to subjugate men like they have done us.

Not to mention, Hippolyta here behaves irrationally. And she’s very impulsive. I’m okay with an impulsive Diana as she’s young, and for the most part, gets away with a lot of things and grew up with peace. I assume this plot point with the Mother of Monsters will grow in Vol 2.

When Diana’s in Man’s World, it seems correct that she’d be shocked by things. Especially things like death, since the Amazons appear immortal, and poverty and injustice. It makes sense that the military underestimates her because she’s a lone woman and one without modern weapons.

However, Diana does two really gross, offensive things while in Man’s World. Two, which really call out to Morrison’s writing and his own privilege as a white man living in Western culture.

The first is when Diana’s in Man’s World, she comments on how the women’s bodies are weirdly shaped. Okay, I get it. The Amazons have lush paradise to run around in and probably do get more exercise. And Yanick draws all the Amazons as gorgeous, tall, and nicely muscled women. The Amazons also don’t have things like frozen TV dinners, sedentary office jobs, or high fructose corn syrup.

However, the lack of varied body types among the Amazons is a failing. The fact that we don’t have ugly Amazons is a problem. Diana’s body shaming of American women is uncalled for and used as shock value. You’d think Diana would be more shocked by some technology, or I don’t know, the way men keep addressing her or not addressing her. Etta is not enough of a strong voice to speak above Diana’s scorn. Nor does Morrison’s writing really actually address that Diana is in the wrong here. Morrison painted himself into a corner of body shaming that he doesn’t understand. I don’t see the Amazons in their paradise as body shamers.

The second gross, offensive thing is when Diana asks Steve to submit to her and offers him a collar. Now in this universe, Steve is black. I think that’s awesome. In fact, changing Steve’s ethnicity is perhaps the only change Morrison made to Diana’s story that I really like. There’s so much Diana could learn about the particular injustices around race in America from just being around Steve.

No, instead, we get this scene where Diana asks Steve to lovingly submit to her, and Steve rejects her, because as a black man in America, his ancestors were likely enslaved peoples at one point. He rejects her because of entrenched racial issues Diana has no knowledge of. The entire scene feels like Morrison patting himself on the back for making a point about race.

Morrison, a white man from Scotland, making a point about race and America.

Also where does Diana buy a dog collar? When does she do this? How does she get money? There are just too many questions while Morrison thinks he’s so clever and controversial.

What did I say earlier — Morrison writes like this so graduate students can write essays about his books.

Overall, this was not a story I wanted. This was not a story that Wonder Woman‘s canon needed. And yes, I too am a bit jaded that DC gave this book to Morrison, not Rucka. Then, it didn’t come out for years after it was announced. They both could’ve written their own versions in that time.

In case you were wondering, yes, I will be reading Vol 2. Because this is what I do.