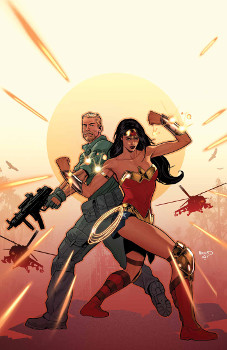 This book has plenty of conflicting ideas about who Steve Trevor is and masculinity. It’s both a fascinating look at how men think about Steve Trevor, and how Steve Trevor must be special or an oddity in order to be able to 1) find Themyscira, 2) woo Diana, and 3) never be threatened by her. This special frames Steve as “Wonder Woman’s boyfriend” in the box with the creative team’s credits.

While certainly “meninist” are a real, current threat happening, they do make an odd villain to kick us off. I can believe they’d fight against Wonder Woman. However, alt-right/Nazis/whatever we’re calling these Nazis today aren’t exactly targeting the government — which government targets are largely what Steve Trevor protects, and a lot of what Diana works on due to her affiliation with Steve, Etta, and the military industrial complex. The reason, of course, that they don’t target the government is because the US government still looks like them and is largely white and male. They instead go about the normal ways of becoming the government in a democracy, which is running as candidates or applying for non-elected jobs with power like the police.

Seeley’s jokes about Steve trying to save Diana the annoyance of dealing with the meninists come off as threading a very thin line of white knighthood. But we see Diana kicking the butt of a giant creature — created in a government lab — and we know Diana is stronger than Steve. Even the cover portrays Diana blocking bullets aimed at herself and Steve.

With the lasso of truth around him, one of the meninists admits that the reason he hates women is because “I’m insecure and full of self-loathing.” While low self-esteem and insecurities certainly do come into play with real life meninists, like members of any other cult, Seeley largely lets them off the hook now that they’re captured. He doesn’t offer any condemnations of their larger movement.

We’re quickly back on topic of Steve being Wonder Woman’s boyfriend. Ever since the original Wonder Woman was labeled as a subversive book by the Comics Code Authority for its portrayal of bondage and lesbianism, DC has an incredibly hard time dealing with Diana as a sexual being. For much of her modern run, Diana was in many ways a pure-of-heart virgin much like her goddess namesake. Even Steve left her as a romantic option when he aged and married Etta. Who deserves to date Diana is a question, and DC has — only when Lois Lane has died of old age — paired her with its other pure-at-heart hero Superman.

However, the Wonder Woman film actually knocked this to a head when the film version of Diana is clearly not a stranger or a prude when it comes to sex and sleeps with Steve Trevor. (Even if Justice League rather situates her as nursing her broken heart in isolation and solitude for 80 years.) Both Rucka’s and Fontana’s runs on this book — as the two previous runs post-movie and before this issue — do show Steve and Diana as consummating their romance, and they seem to have a mature, adult romance. (These are still Teen-rated books, so don’t get too excited.)

Seeley, on the other hand, seems shier about Diana’s sexuality. Diana’s comments about their date and having “sexual tension” are played as overly frank due to her holding the lasso of truth as they round up the bad guys. And certainly, in long-term romantic and sexual relationships, both flirting and sexual tension are important for getting to the sex bit and maintaining that relationship with your partner. But due to the history of avoiding sex and Wonder Woman together, it seems like DC once again doesn’t know what to do with Diana and dating. And this doesn’t even touch her bisexuality.

Before Diana and Steve can go on their date, Steve gets a message about a secret mission that is so secret he can’t even tell Diana about it. This balance of Seeley’s is weird. In one direction, Steve is a “secret agent,” and his job means he will go on missions Diana can’t know about. Even if often in the comics, he brings Diana along or ends up involving her. Which in the other direction, it makes this mission seem a little “boys will be boys” in that men can go off and have secret lives without their girlfriends, or even coworkers, knowing where they are, what they are doing, and when/if they will ever come home (see all of Don Draper’s story in Mad Men). Diana, while not left “at home,” is then left off-screen and telling Steve she expects him back for their date.

We know Steve’s a good guy and that his secret mission won’t involve partying and other women, but instead is a dangerous spy mission. Steve has a lot of thought bubbles here where he discusses how he has secrets from Diana from his life before her and also as part of A.R.G.U.S., a secret government agency that he cannot tell Diana he’s part of. This is an A.R.G.U.S. mission to save The Oddfellows, his band of brothers who Diana also knows nothing about.

While Seeley pitches Steve’s secrets as essential and required for his job, he is still presenting Steve as a man who needs life secret from his girlfriend Diana. That Diana is too good and pure to be tainted by this secret life, and needs to be sheltered from it. This also puts Diana back in the realm of too good for any man to taint her with his darkness or the necessities of manhood.

The Oddfellows are all modern reimaginings of the men from the Wonder Woman film who help Steve and Diana fight the Germans and ultimately Ares. Charlie, Sameer, and Chief are mostly the same guys from the film. This issue came out slightly after the film, and I do wonder if Seeley had seen the movie before writing this, or not. I kind of lean toward not, given that his descriptions of each of them read like a casting call or script description more than prose meant for a reader.

Regardless, Seeley uses this characterization shortcut in order to endear us to them and give us a deeper understanding of them without having to set up new characters fully. Even though they are “more weird and dangerous” than the baddies they’re going after — Saturna and the Crimson Men — Steve and their movie personas let us know who the good guys are.

The battle with Saturna and the Crimson Men is somewhat standard comic book supervillains. It’s only worth noting that Steve and the other men take Saturna’s threat seriously and her gender is never brought up as making her less of a threat.

In the fighting, the Oddfellows save Fatma — who appears as an old lady, but is actually an immortal child who’s wandered away from her fellow immortal children, their hidden paradise, and the literal fountain of youth — and cleverly find her people. Saturna and the Crimson Men follow them, and they battle once again.

Here Steve mostly feels guilty for trampling on paradise (again) and bringing darkness to it, the same way his finding Themyscira brought darkness into Diana’s life and cut her off from her people permanently. (In the current DC canon, it was revealed that Diana actually wasn’t going home when she thought she was and it was a trick of the gods.)

There is also a bit where Steve and the Oddfellows all elect to leave the paradise for various reasons and not tell A.R.G.U.S. about what they found. They know that the secret organization will exploit the fountain of youth and be no better than the Crimson Men. Chief sees this as Steve knowing where his true loyalties are: with the Oddfellows and with Diana.

Steve then thinks: “I’ve been a lot of things in my life. Paperboy. Frat boy. Spy. Pilot. Military liaison. But maybe most importantly….I’ve always been a little odd.” Of course, Seeley has been setting up Steve for this revelation since the beginning of this issue. We know Steve cannot be normal because of the extraordinary life he leads, and maybe just as importantly, the extraordinary woman he dates.

Of course, I still find Seeley’s writing even odder than this date outfit choice. Instead of sharing with his partner, Steve decides to keep his adventures and affiliation with the Oddfellows quiet. He decides that telling Diana would be too close to therapy around his guilt because he “took a pierce of paradise back.” I really hate this ending as it turns Diana from someone who had agency — so much agency that she defied her mother/queen’s orders to go to Man’s World — to an object stolen away by a man. An object that Steve’s taking out on a date and lying by some admission because he’s still too afraid to talk the truth, too afraid of the darkness of his masculinity ruining this object (Diana).

The ending also leaves the story open with Saturna getting a drop of the immortal waters from under a pile of rocks. Was this planned as a backdoor pilot, if it got enough sales? Or is this just comic book editors keeping the door open?

Seeley’s Steve Trevor needs to figure out how to be a man without a hidden life. He needs to confront his guilt with Diana and talk through it like an adult. In many ways, Seeley doesn’t understand how to make Steve express his emotions beyond the protection of the team, fighting to save children, and some kind of love for Diana. But how does Steve make the next step? Steve may never be a meninist and he may be okay with Diana being more powerful than him, but he hasn’t dealt with guilt, or his feelings of her being more pure-at-heart than him, and he certainly hasn’t expressed this to her. If this book did continue, these are the questions that I’d love to see a writer explore with Steve.