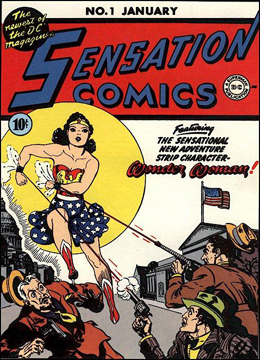 On the other hand, my head scratcher was Wonder Woman’s first job — theater/circus performer –, random people’s reactions to her, and how she became a nurse if looked at through the lens of Diana being a new immigrant to America.

A new immigrant with strange powers comes to America, needs money, and becomes a novelty act performer. This seems problematic to me. Even if Diana is so beautiful compared to grotesque as many geeks were, and she seems so excited to show off deflecting bullets with her bracelets.

I also found the random strangers on the street heckling/checking Diana out in her Wonder Woman costume disconcerting. Older woman comment on her overly exposed skin and old men heckling her as a ‘honey.’ Again, we have the new immigrant who doesn’t know the customs of the land, despite her being wrapped in the American flag.

Then Diana almost gets ripped off by her boss. (She may not know how to use the legal system, but she can pick up the back of his car to foil his getaway.)

With her rightfully-earned money in hand, Diana buys her identity off a broke and crying nurse, who longs to reunited with her finance in South America. That’s right Diana Prince is a fake identity bought and paid for by a new immigrant. But don’t worry, Diana retains her plucky immigrant happiness at her new job and her obsessive love for Steve. (Whose butt she’s now saved twice; though he keeps getting broken.)

As a superhero, Diana’s first adventures into America doesn’t seem that strange. But as an immigrant, Diana’s ventures are problematic and stereotypical. Well, until she follows Steve in her invisible jet, saves him, and helps foil the Nazi’s poison gas plot at the end of the issue. So perhaps Marston’s putting Diana, the immigrant, on the extra-fast track to becoming an American, but more importantly an American hero. After all, Diana’s here to “…help [Steve] wage a battle for freedom, democracy, and womankind thru-out the world!”