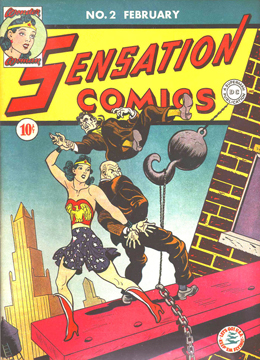 In this issue, Steve and Diana are kidnapped from the hospital by Nazi agents, attempting counterintelligence gathering. They want to know what Steve knows about Nazi plots.

The first utterly bizarre thing is Diana letting herself and Steve be kidnapped. But I can write this off as Diana knowing she’s superior to her captors and not worrying about being hurt. However, this pretty much makes her a horrible nurse. Of course, my favorite part is Marston telling the reader that Diana is a tender nurse, but having her tell Steve to not be such a crybaby when he complains about her wheeling him around.

Diana’s tied up twice by her captors, and every time she easily undoes their ropes. They just can’t figure out how such a small girl does that. She’s just like Houdini. At one point, Wonder Woman wishes they’d put her in chains as they’re so much more fun to break. She breaks out and escapes from her cell to find Steve help.

Meanwhile, Steve’s being interrogated by Doctor Poison. He’s supposed to under a truth serum, but Diana switched it out with saline before Doctor Poison injected him. Doctor Poison also tells Steve that currently a Reverso poison’s been put in the water supply for the local army base. This makes soldiers do the opposite from what they’re told. They’re told to dress, and they start stripping. Luckily, the officers — who don’t drink from the same water supply — figure out what’s going on and tell soldiers to march backwards so they’ll go forward.

Diana drives a car to the Holliday College for Women. There she seeks out Etta Candy, formerly one of Diana’s patients and now friend. (Marston’s unclear about whether Etta is the real Diana’s friend or one of Wonder Woman’s. It’s also unclear if Etta’s a student or the teacher.) The first thing Wonder Woman says is how she would’ve never recognized Etta because she’s gotten so fat. Etta’s sitting down — when everyone else is standing –, the only overweight one, and she’s stuffing her face with, you guessed it, candy. When Wonder Woman says she needs Etta and the girls’ help to save the man Diana loves, Etta replies that she’d do anything for Diana, except diet! Har, har.

Holy crap. Marston’s completely playing on the fat, ugly, funny girl who’s the best friend of the beautiful, wise heroine. Don’t worry, Etta Candy, you get the guy in the end.

Diana needs the women to distract the Nazi soldiers; “We need a hundred pretty girls brave enough to capture dangerous men.” She tells the girls the agents are dangerous, but not that they’re Nazis. That’s right a marching band of 100 girls go to distract Nazi agents. They face down the agents. (But not before Etta almost quits due to running out of candy to eat part way there.) Then they throw a dance while Wonder Woman rescues Steve. The dance ends with all the Nazi agents in handcuffs as Wonder Woman supplied the girls with their only weapon of bondage fun.

Wonder Woman and Steve then go to Doctor Poison’s lab to find Reverso’s antidote; but Doctor Poison engages them in battle first. Diana tugs off Doctor Poision’s scrubs and mystery face mask, only to reveal Doctor Poison is a woman, Princess Maru. Maru starts shooting Wonder Woman: who gladly plays bullets and bracelets with her. Etta tackles Maru, and Wonder Woman makes a comment that she needs to put together a woman’s football team.

Diana takes Steve and the antidote immediately to the military, leaving the girls to keep guard over the Nazi agents. Etta’s seen smacking Maru’s ass with a large wooden paddle and complaining about how she wants some chocolate creams. Maru begs for mercy. (This panel is totally kinky domestic disciple, all text and no subtext.)

Meanwhile, the military’s happy to have Steve back with nurse Diana by his side, and Steve’s telling the world of the beautiful Wonder Woman who saved him.

I don’t know what to say.