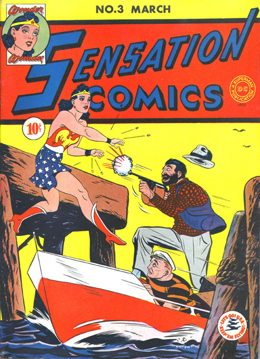 I realized as I read Sensation Comics #3 that Wonder Woman’s story is both an affirming tale for young girls to read about a female superhero and a Cabinet of Curiosities. As a modern reader and an adult, I find a lot of the Cabinet of Curiosities-angle ridiculous. And I think I’m still rather on the fence about young girls venturing into Marston’s Cabinet of Curiosities. I understand the feeling that Wonder Woman’s adventures there are not so innocent, but at the same time, I was also a young girl reading Anne Rice’s Cabinet of Curiosities, which are far more explicit. Diana being tied up as a hostage is innocent compared to Rice’s Belinda and her lover, the pedophile children’s book author/illustrator she runs off to live with. I have a hard time pointing my finger at Marston for being inappropriate or thinking that children need to be protected because I remember myself at that age. But enough about my tween years.

Sensation Comics #3 feels like the first real Diana story. Yes, once again, Steve’s job and foiling Nazi’s plots fits into the narrative, but this adventure was about Diana, her fellow secretaries, Etta, and Etta’s schoolmates. Oh, I should note that Diana changes jobs as soon as Steve’s discharged from the hospital. She becomes the secretary for Steve’s boss, Colonel Darnell. Yes, the Amazons have their own form of shorthand. She also becomes the subject of Steve’s secretary Lila Brown’s jealously. The plot involves Diana pinning Lila as a Nazi spy, Diana being accused by the Colonel herself, and Lila’s sister, Eve being the actual spy and finding redemption.

I feel like the girls reading this in 1942 could find themselves in the narrative. If they weren’t Wonder Woman herself, they were Lila or Etta or one of Etta’s friends ready to help Diana in an instant. Plus, every issue passed the Bechdel Test with flying colors. This is empowering. This is what made Wonder Woman one of the major characters of her day and an enduring powerhouse. Wonder Woman’s an inspiration of what to be, and she’ll even be your friend. How cool is that?

Then there Marston’s Cabinet of Curiosities…

We have the Amazon video phone Diana gave Etta so she could call her when in need. Diana simply has to think loudly and her headband allows her to connect to the machine. The machine’s bell starts ringing, and Etta puts on her own headband to see and hear Wonder Woman’s message.

Again, there’s candy-eating Etta and her girlfriends ready to help Diana out. I can’t tell if Etta’s supposed to be grotesque compared to Diana’s beauty. She does run around with two boxes of candy under her arms and is drawn to be twice as large as the rest of the girls.

Finally, Etta goes about spanking another female Nazi. This time the repentive Eve. (Does her Biblical name mean something about temptation? As, after all, she did help the Nazis because of a man she fell in love with.) Here Etta dangles a piece of chocolate in front of Eve, while Eve’s on all fours and being spanked by one of Etta’s girls. They play it off as a sorority sister haze. When Diana questions Etta’s “torture” of Eve, Eve says it was humiliation, not torture. Certainly, in bdsm culture, part of Dominate/submissive mindset can have a humiliation angle to it.

However, I also thought about a young girl from the 1940’s and how she’d react to seeing Eve spanked. Marston’s fetishes aside, spanking was a common punishment by parents for children. Today, not so much, but then, no one batted at eye. Even school teachers spanked misbehaving children. While American children might not be fully aware of World War II, they did know Nazis were the bad guys, and to a child, spanking might be a fitting punishment for a woman who was a Nazi sympathizer and spy for a while. Etta — who always gathers all the girls and leads them — clearly fits into the parental role; she even offers Eve a home at Holliday College for Women at the end.

I rather eagerly await the appearance of the lasso and to see how a further dip into Marston’s Cabinet of Curiosities looks with his stories of Wonder Woman, icon for young girls and barer of “woman’s eternal gifts — love and wisdom!”