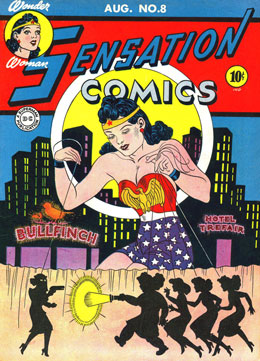 In Sensation Comics #8, we have the second instance of Wonder Woman fighting for the common person. You know, the common white person anyway. Here she helps out a friend of a friend, Helen, who’s been terminated from her job at Bullfinch Department Store for stealing and is just out of jail. You see, Helen stole for her friend Molly, because the Bullfinch girls make no money, are run ragged, and she was going to pay Bullfinch back in full for the vitamins she stole. Yes, corporations are evil, how unAmerica of Wonder Woman.

Instead, Diana confronts Bullfinch’s evil CEO Gloria Bullfinch and demands to know why she doesn’t treat her workers better. She does this at a fancy party. Is this Wonder Woman first foray into the world of being a diplomat? Well, she’s a diamond in the rough.

Then as Wonder Woman, she comes up with a plan to foil would-be robbers and make Gloria understand the plight of her workers. This involves Etta and the Beeta Lambda Sorority getting themselves hired by Bullfinch and hiding out in the store on the night of the robbery. (Etta works at the candy counter. Because she’s fat and loves candy, get it?) It also involves Wonder Woman using her lasso to make Gloria forget who she is and convince her that she’s only a store girl. She now has to work in the exact same conditions, knowing no other life.

But the robbers, Bullfinch’s male business partner and her boyfriend, knock Wonder Woman out and tied her up. They still manage to take her with them to the department store. Of course, a conscious Wonder Woman, Etta, and the gang foil the plan. Steve gets locked in a safe. Gloria gets her memory back, and she claims to have known nothing about the horrible working conditions of her store. She also punches her boyfriend in the face. It was all the men’s fault.