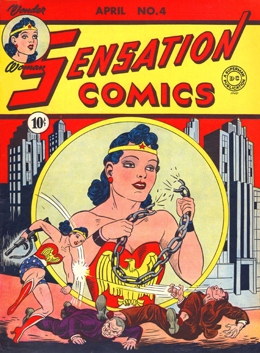 In this plot, several women tied to government work go missing; Wonder Woman and Colonel Darnell investigate; and separately Steve decides Eve should go undercover. Turns out Baroness Paula Von Gunther runs a Nazi spy school for girls and brainwashes government typists into being her slaves/spies. Wonder Woman particularly bonds with Carla, a typist she works with who’s absence at work makes Wonder Woman worry enough to investigate. The Baroness’ is foiled by a combination of Etta, Steve, and Diana’s actions. There’s a whole lot of spanking and Wonder Woman gets tied up once.

First, there are two kinds of slaves in this issue, the willing and the unwilling.

Eve’s a willing slave to Etta and the other girls. Once again, she’s spanked several times just for fun, and at one point, she’s chained via a large dog collar to her desk to study. Etta berates her as a “neophyte,” while Eve seems okay with everything except that Etta’s going to make her late to meet up with Steve for their mission.

On the other hand, there’s the unwilling slaves girls of Baroness Von Gunther. Yes, the Baroness calls them “slaves.” The Baroness and her allies chain the girls in cells; make them march in chains while whipping them; force them to learn code for 6 hours a day; and general hurt or kill them when they get out of line. At one point, Wonder Woman makes the observations that the girls are brainwashed and drugged.

The Baroness’ actions are both a warning about what can happen at questionable parties and why you should never submit if you truly want to say no.

Questionable parties: All the girls are captured when the high society Baroness invites them over for a society event. In the case of Carla, her tea’s roofied. In Diana’s case, she’s kidnapped (however, willfully in order to get to the secret spy school) and Darnell’s told she went home with a man. Both are common enough ways women are violated at parties by “friends” and acquaintances to think that Marston’s saying something more than just Nazis-are-bad.

Submitting when you want to say no: The women in the Baroness’ spy school for girls are clearly out-of-their-minds and slaves. Diana sees them as Stockholmed. One awesome thing about Diana’s portrayal and attitude about the girls is that she never victim-blames. She knows the girls are brainwashed and possibly drugged; she knows they did not offer themselves as slaves and she’s blames the perpetrators: the Baroness and the other Nazis.

In fact, Diana’s the one who helps slave Carla out of her brainwashing by guided meditation. (Lasso would’ve been useful here.) There’s no doubt that Diana sees Carla as a sister in need. (Perhaps Wonder Woman is the founding member of the Open Source Women Back Each Other Up Project?) Early in the comic, Diana tells Carla that she, Diana, is a stronger mistress than the Baroness because she is kinder (and pays attention to consent).

We also see Diana become a salve. She tells Baroness “I submit” and allows chains to be welded onto her bracelets. Obviously, Diana doesn’t want to submit, but she does it as a way of going undercover. Marston clearly says Wonder Woman’s gone too far here, submitting herself unwillingly. Back on Paradise Island, Hippolyta warned Diana that when the Amazons allowed themselves to be the slaves of Hercules, they lost their super-strength and were unable to escape. However, Diana’s forgotten and finds herself without strength. She can’t break the chains anymore than Carla can.

For the first time, Wonder Woman’s frightened for her safety. She doesn’t have the upper hand, and she has no idea Steve’s on his way. And neither of them know so are Etta and her sorority. Still in her moment of darkness, Diana helps Carla. But then things get worse when Steve’s captured (largely due to thinking Wonder Woman could bust them both out) and he and Wonder Woman are put before a firing range.

Wonder Woman stops the bullets with the bracelets and breaks their connection to the chain, thus freeing herself. She uses her intellect to save the day rather than her brute force which her abuser had — temporarily — taken from her. The rest of the girls are freed, and everyone goes home. Except the Baroness and her Nazi allies who go to jail.

But before the issue ends, Diana calls in sick to work. For the first time, she seems exhausted. Diana says the party was “strenuous” and Darnell gives her the day off, thinking she had too much fun. Then Wonder Woman finishes the story talking about needing to be more careful in the world of man. A warning to her sisters to watch out for themselves and for their friends. She warns us.