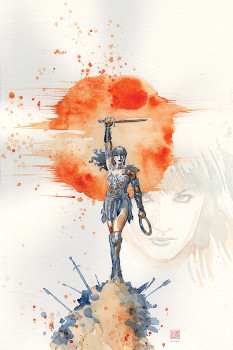 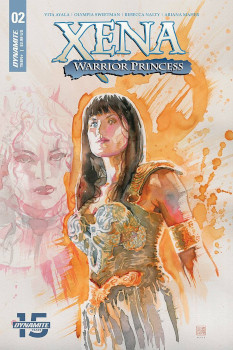 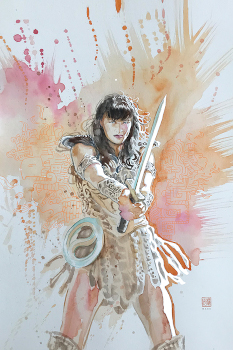 Two Dynamite books I’ve liked? Well, the editorial team is finally making some good choices, which is good because there’s always room in the market for beloved properties under a good team.

I’m so happy this book isn’t fucking around with Xena and Gabrielle in a queer baiting manner. It’s clear they are a couple. Xena was one of those shows that couldn’t be out-and-out queer, even though it was very gay, but also now it’s 2019, not 1999, and it’s a comic book where no one cares. This book’s audience is queer people.

I kind of don’t care about Discord. Though this plot of the village promising away its grandchildren to Discord to save the lives of its children a generation ago is a very Xena plot. Ridiculous stakes, some sad eyes, and a Greek tragedy of a story.

Plus, the village believing that Hercules might come to rescue them, but then get Xena and Gabrielle instead, was cheeky.

The art doesn’t blow me away. But it’s good art. It adds enough to the story. I also cannot imagine how annoying Xena’s costume must be to draw, right up there with Red Sonja’s chainmail.

I guess god stories bother me. I’d much rather have a focus on Xena and Gabrielle. But now they’re going to be babysitting Discord and likely helping her get her powers back. While I don’t remember a ton of Xena TV plotlines, I feel like there were probably very few scenes with the entire pantheon lined up.

While everything Xena and Gabrielle did was smart, I didn’t exactly expect an army of geriatric people to take on prime soldier age Romans. Especially since we know Xena could take out a lot of them by herself, and Gabrielle is no slouch.

The Magistrate’s grief about what she allowed to happen to save her child, and how she was worried about and didn’t feel like she should or could go home, was lovely and realistic. This could’ve been far more interesting to play out, or have our two heroes discuss in their own context. But instead, we get Discord getting her powers taken away.

The changing artists very much drag down this book. I’m not a fan of Pérez’s pencils, which don’t distinguish the faces of Xena, Discord, and Gabrielle very well. They also vary widely in quality and certain scenes like the priestess in the temple show potential. I guess I can only hope that the artist changes once again.

It is fun to see Xena in South America. I’m not sure if the TV show ever went to the other hemisphere, but I also enjoyed the idea of Zeus sending Discord to another pantheon of gods.

It seems like maybe Xena wouldn’t go on this quest when she finds out it will summon an apocalyptic god. This seems like a shady situation overall, and it will be another mess of Discord’s that she might have to clean up.

Except they just ended up in the snow, and I’m not sure where. This means not only was the art light here, but the writing also left me confused.