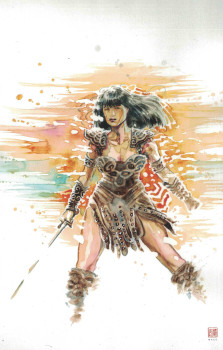 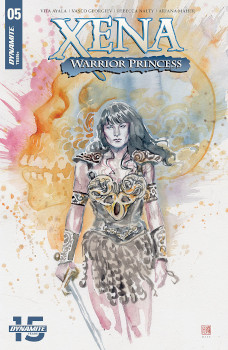 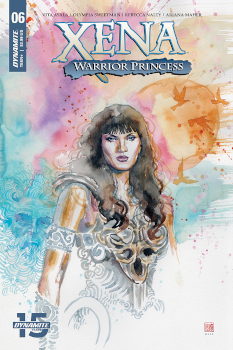 Besides the opening issue, this is probably my favorite plot they’ve had so far. It also explains what’s happening — Discord is getting other gods to transport them closer to home — and how Discord has become more like one of the gang. Enough time has passed that Gabrielle has gotten ill in the cold, and they saved a capybara who transported with them from South America accidentally.

D’Urso’s art was okay. I thought she did well to show illness, and her Baba Yaga was great. However, in the opening scene, Xena looks like she’s about to pop out of her top and topple over from her breasts.

The origins of the Baba Yaga myth was great to see Gabrielle put her skills to use, and I liked the twist that the mob-leading man was related to Baba Yaga. Storytelling as a plot device worked well to explain the magic of Xena‘s world.

In general, I thought this was an excellent stop to explain the mechanics of our road trip and the ultimate aim of the crew. By landing in Romania, they are almost home.

I wish this could’ve been a longer road trip series. Though I guess all of Xena: Warrior Princess was always a road trip show as she and Gabrielle never stayed in one place. This one just explored more of the world. (Even if the TV show went to some wacky places.)

Georgiev’s art was by far my favorite so far. Their pencils fit the mood of fighting Dracula, or whatever he called himself. I loved the cape-cloak that Discord wears when she heads to the castle. And Nalty’s slight red coloring of the vampire-influenced’s eyes was perfect.

It did finally feel like Discord was part of the gang. She and the capybara rescue Xena and Gabrielle for a change. It shows how much Discord’s grown.

The vampire kit was hilarious. The innkeeper is so casual about it was just like Dracula coming back at the end because he always comes back at the end. (Which is why it’s the best in Buffy: the Vampire Slayer when Buffy waits for him to rematerialize and then stakes him again.)

I’m rather sad the next issue is the last, because I very much see Ayala getting comfortable with these characters and this story, and I want more. More with a stable and good artist.

The only thing shocking about this issue was the Harpies’ boobs. I mean, not the Dynamite doesn’t print a lot of comics with boobs, I just wasn’t quite expecting it.

It was very predictable that Discord went back to Olympus, and that Discord got her godhood back. This is where the entire comic book has been running toward. There weren’t any lessons learned for Discord, and apparently, Zeus has one trick and sends his naughty family members to the same place in South America.

Xena and Gabrielle’s ‘I love you’s and kiss at the end was great fan service, and I appreciate it. I just wished there had been more to this book, or something new we could’ve ended on, or continue the story on. But everyone is back exactly where they were in issue #1.