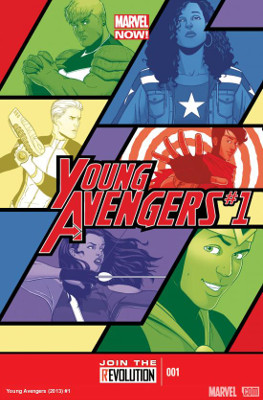 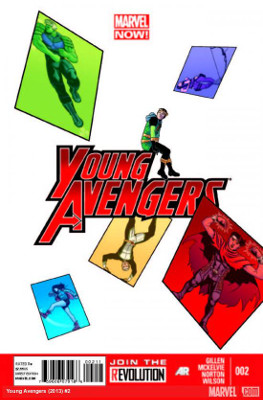 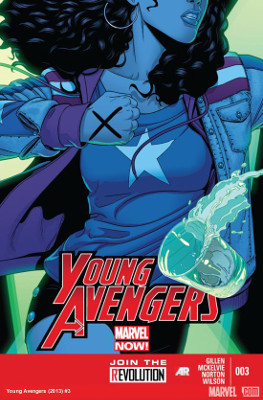 This is a super awesome book. I’m so looking forward to more from it.

Kate is totally my favorite. I love that she’s all out for adventure and nothing else. That she feels out of her depth — since she’s powerless — but that’s what she loves the best. And yay for her hooking up with Noh-Varr and not knowing his name.

Hulkling going out is cute. But Wiccan is right for giving him crap about it and then all of them wanting to be superheroes.

You’d think Wiccan would know better than to bring back the dead. Yes, this is completely a bad idea, and it doesn’t surprise me that Hulkling’s mom isn’t a good person.

I cannot wait for more of this book. It’s awesome.

This title remains so good. I love how Gillen’s creating a problem that only the Young Avengers can solve and the Avengers (and I’m going to assume the Asgardians) won’t be able to lend a hand with. (Though complete aside, I love the Scarlet Witch’s redesigned outfit.)

Though doesn’t anyone think it’s odd that everyone’s calling Ted’s mom, “Ms. Altman”? That’s usually your first sign that something hinky is going on.

Love to see Loki helping solve their issue out of his own need to destroy the interdimensional creature. Also making them pay his overdue diner tab, plus giant tip.

Looking forward to having the rest of the gang join back up for the next issue.

Parents are the worst. They are just problems, and for the Young Avengers, they’re actually evil. I’m wondering what exactly happened to the real parents. At least Billy’s.

I love seeing them band together. However, they also have a weakness for not wanting to fight their parents. Plus, these shapeshifter, goo-beings seem to also be great at picking up memories. I always think that the best way to get to know someone quickly is to visit their house and meet their family.

Miss America’s slowly turning into one of my favorite character. With her speed, her smartass at Loki, and her mothers. Looking forward to getting to know her more.