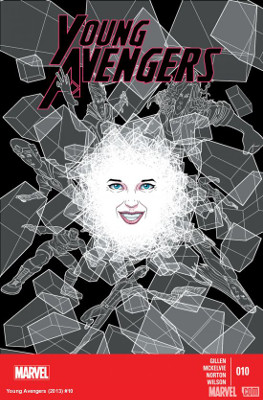 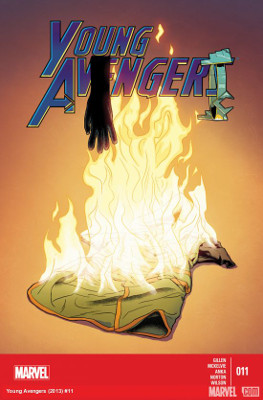 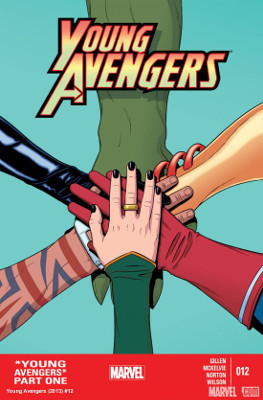 Totally unsurprising that Loki would’ve been the one who made a deal with Mother and caused her to come after the Young Avengers. And now that’s coming back to bite him.

Honestly, I don’t know a lot about Leah, so I can’t be surprised by her betrayal. Clearly, Loki is in more trouble than he bargained for. I do feel extra sorry for Hulkling, who’s a generally trusting person and clearly having major doubts about his relationship with Billy and his entire existence.

I do wonder how all the dots are going to connect and just how they’re going to get the entire team back together. Plus, as we know, Mother isn’t my favorite villain.

The introduction of David into this group seems even smarter now. I never really thought about how the Young Avengers are a pretty isolated group in Marvel’s canon, but David has far more connections into the greater universe. I love that he sends out a few text messages to get a bunch of teens together.

I have to agree that Noh-Varr’s facial hair made him look old and like Father Christmas. I adore, though, how unfazed Kate is that he has lots of exes. And apparently, quite a few women on Earth who want to hook up with him again.

I almost think this aging Loki into an almost adult teenager was just so McKelvie could draw him to look like Tom Hiddleston. I guess whatever sells your books. The Hiddleston fans are legion.

Billy’s rage hasn’t even started. There’s definitely some growth in his character; in that a few issues ago, he probably would’ve done a lot more than punch Loki. There might’ve been some pummeling.

While I’m happy that they’re all getting ready to go rescue Teddy, I almost feel like, in part, they’ve forgotten all about finding Tommy.

I’m crossing my fingers that Leah pulls something at the last second that will take down both Mother and Loki.

Everyone freaking out about getting older is kind of funny. (This also could be because I just turned 30.)

This is actually not a terrible plan. Well, not as terrible as usual. I’m glad to see that they have a ton of backup to fight the lesser dimensions.

Cracks me up that the spaceship’s currently labeled “Panic Station Wagon.” Pretty much.

I’m not sure we really needed to have Billy meet one last time to try to reason with his parents and also Captain America. I mean, I guess for those new to the book, here’s some extra confirmation that they really need to fight Mother and that Billy needs to summon all his crazy powers.

The quippy dialogue is fun. However, I’m still feeling that Billy is perhaps the hardest character for Gillen to crack. Maybe quippy isn’t his thing. And that’s why the other characters serve as such great filler.

Does this mean Miss America likes women? I approve.

Okay, not quite getting this Leah-is-Loki thing. Does this mean Loki stole another body? It is his conscious? Or did Leah just steal his powers and get a mainline into his consciousness as well? The latter would be some major karma for Loki.