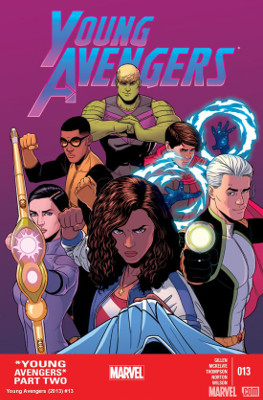 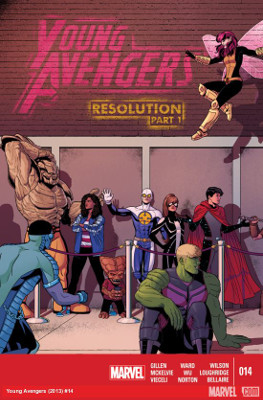 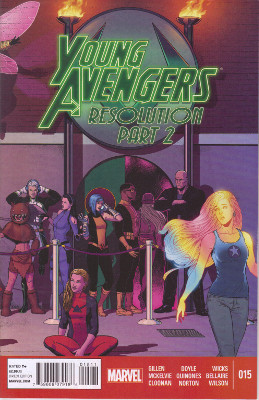 Woohoo! Looks like this plotline with Mother is finally all cleaned up. And Billy knows what it’s like to tap into his demiurge powers, kind of. I’m okay with the super cheesy love takes care of all solution. I think Miss America tapped that cheesiness in the perfect way.

Okay, I didn’t see Loki-Leah being all the evil exes too. Though perhaps Noh-Varr still getting love messages from them was a hint that the ones in Mother’s dimension weren’t real. That was a clue that I missed. Just thought it was part of Mother’s trap.

I like that Gillen left out some unresolved plots. We still don’t know exactly what and who Patriot is, and Tommy’s still missing.

Not sure why Noh-Varr actually thought it was a good idea to really break up with Kate for a fake Oubliette. Who was clearly the most crazy of the fake exes.

Loki revealing all wasn’t surprising. Perhaps, it’s because we readers already knew that he played them from the beginning to get his powers back. In a way, Loki always does exactly what he needs to in order to get what he wants. So there’s a real possibility that his apology wasn’t even genuine. While I know Gillen and McKelvie love Loki, I’m okay with him not being in this book anymore.

I’m always a fan of “that’s a wrap” kind of issues where the team gets to just hang out, bond, and digest whatever happened on their latest adventures.

Kate telling America about how her birthday celebration with her father made her feel old was a great contrast to America’s story of why she found the Young Avengers. I wasn’t guessing that she was from a universe that Billy made utopian. But I love that she was inspired by him and her moms to be a superhero. Of course, she’s finding out the fallacy of one’s heroes. Much like Kate found the fallacy in her family. Family and heroes are all just human too.

Of course, Billy and Teddy are adorable together. Maybe David can get a Teddy clone, kind of like Rose got Handsy instead of the Doctor.

And Tommy’s back. I hope he serves for more than a jealous plot device for Kate and Noh-Varr.

I’m so freaking sad that this comic book run is over. I’m going to be crying my buckets of tears over here. I suppose that I should be glad that the creators got to wrap up the story on their terms and step away from the book without being forced due to cancellation (like most books these days), but still…

The best scene was by far Kate realizing that she’s the only straight one (except maybe Tommy who’s not looking), then America saying that she knows how Kate looks at her. Winning a thousand times. I really hope an awesome writer picks up America to stick in their books. I need some more of her.

I’m kind of okay with them just being like “oh, Tommy’s back” without fanfare or even solving the mystery. Even if Prodigy figures out that future Patriot is him, and if Patriot didn’t kidnap Tommy, David would’ve never joined the team.

Tom Hidddleston Loki weirds me out. And Doyle’s drawing style makes him so sharp.

Breakfast is the best answer.

This book is just so damn schmoopy.