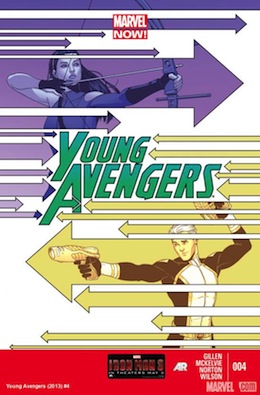 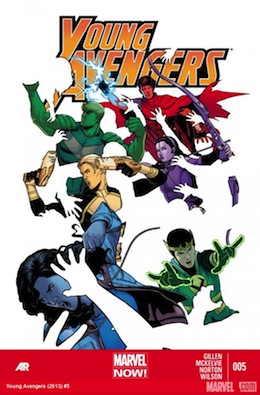 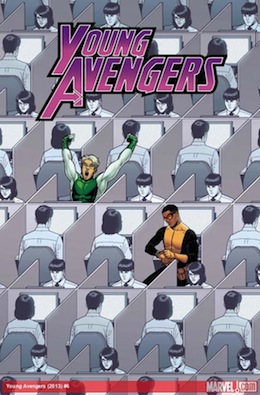 Whatever creatures that Wiccan brought back from between dimensions are pretty terrible, and things are looking really bad in this book. Like they’re not going to make it back from this.

Miss America continues to be my favorite. Though having Kate back and active in this book is super awesome too. Noh-Varr should’ve guessed that his parents would make an appearance too.

The scene with Thor and Captain America cracked me up. Let the kids have their big battles.

Wiccan giving Loki his powers is probably a bad idea. After all, clearly Loki’s stirring up shit by pointing out to Hulkling that he might be a figment of Wiccan’s lust bunnies.

I am kind of looking forward to this plot being wrapped up.

Okay, them never being able to see their parents until they really figure out how to kill this interdimensional creature is a bit too convenient for my tastes. At least, there could’ve been a better reason for all them having to go off in Noh-Varr’s ship never to return to their homes. (I hope we don’t forget that they’re also avoiding graves and other parents we didn’t meet this go around.)

Noh-Varr’s ship running off imagination was too funny.

Interesting that evil Loki is in charge while good kid Loki plays his conscious. I feel that Gillen doesn’t want to give up good kid Loki even if editorial concerns may have a louder voice.

Glad to see that Billy’s parents were okay and that they didn’t remember anything.

Okay, David Alleyne may be one of my new favorite characters. I love that his power was to absorb the knowledge from people (even if he doesn’t have his powers anymore) and that he could do so without bad consequences to that person. Unlike say Rogue. The comment about him knowing things like how Emma and Scott like to kiss was perfect to show the downsides of this skill.

Tommy working a normal job is a hoot. Especially since he comes in and jams on it and then leaves for several weeks.

I like the easy way that Tommy insists that he and David are friends. Even though they barely know each other. It seems very true to both youth and a work environment where you find that one person you really like hanging out with. Or makes work life tolerable.

I’m glad that Gillen is going to go into what happened to the Patriot. I’ve been wondering myself since he doesn’t seem like a character to just give up. Something hinky is going on.

Brown’s art was a delight. I like how it followed McKelvie’s layout style, but held up on its own. More please.