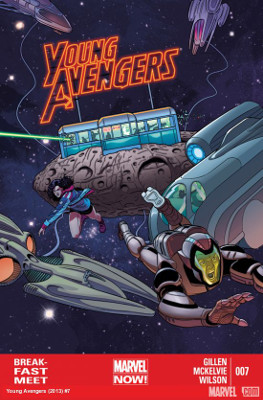 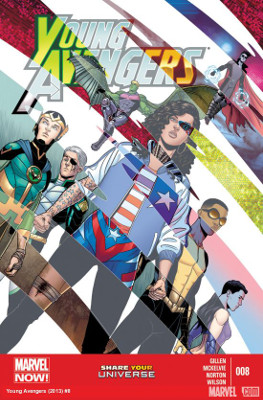 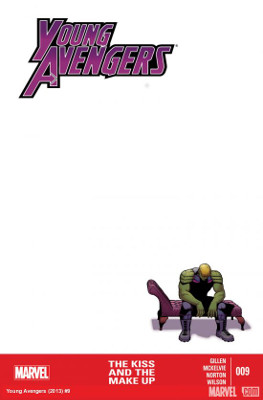 Pretty cute to see the team chasing around what they assume to be Kree warriors, but turn out to be pretty mundane shapeshifters. And the irony of them also being teenagers around the Young Avengers’ ages.

Pancakes is universally the best food around. I can’t help, but agree.

I think it’s cute the way that Gillen and McKelvie have incorporate the use of social media technologies into the story. Because of course that characters would be using them. Though I do wonder how much this might age the story in 15 years.

I liked Prodigy’s explanation of how he tracked them down and how it wasn’t that hard after all. Kind of… Though I think he might’ve bargained on having to do a hard sell on Tommy’s disappearance. Nope, they’re going to go after him. It’s not like Wiccan’s never been overly determined to find a missing relative before. Never.

McKelvie’s been doing a great job in this book at playing with different patterns. I particularly liked the art where Miss America broke through the dimensions.

Looks like Patriot (or whomever he is) will be giving them a run for their money.

I like that the Young Avengers have basically become Sliders, which is a show that I could always get behind as a premise. I cracked up when Hulkling asked just how many universes had Earth conquered by the Kree.

I could get behind some Korean bbq. Also that Miss America has been there before and isn’t allowed back as she put Loki through the wall. Which means, they do have some control over their hops.

My favorite lines were definitely this pair from Loki as villains line up behind him:
“Let’s get out of here before something horrible inevitably turns up.”
“I hate you, inevitable horrible!”

Seems like there will be consequences to Miss America punching that one being in her black-hole head.

Of course, Wiccan is the ruler in the stars with the dimension with cute fuzzy creatures. Though it reminded me of Blue Beetle when they end up on New Genesis, so I was expecting the creatures to try to kill them.

As much as I was over the Mother, I’m actually glad to see them bringing this plot around and connecting Patriot to it.

Wow, I so did not see David kissing Tommy. Yowsa.

Wow, I really wasn’t expecting that ending. Okay, I was kind of expecting it. But perhaps not so soon. Of course, Teddy has to figure out if Billy has manipulated him into being in a relationship or perhaps fabricated him from nothing. This has got to hurt.

And the entire thing feels a bit disingenuous when David helped Teddy work through his feelings, but only after he kissed him. (Though I’m so excited to have another bisexual character in comic books!)

I was most shocked to see the grown-up Leah playing counselor to Teddy. Clearly, they somehow rescue her from her spot at the beginning of time or in a secret dimension.

So given Mother’s ominous warning to Kate, I take it that her taking over beings has more to do with their age than relation to her enemies? Is that why Patriot is a pawn?

I do like that they made all the people from different dimensions that were upset with them chase Mother. Obviously, nothing will happen from here.

Do love Kate as the adult.

Join in on their dimension hopping and buy Young Avengers Volume 2: Alternative Cultures