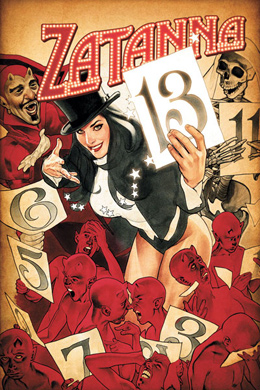 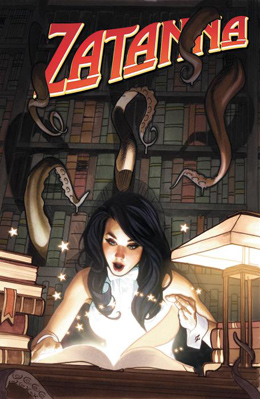 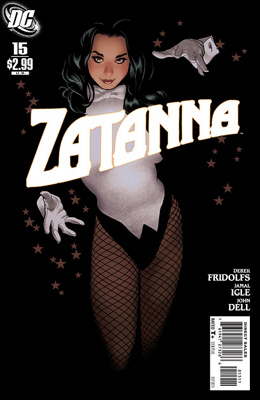 Wait, is Mickey a boy in Zatanna’s flashback? Did someone not get the stage crew correct? Or is this supposed to be some kind of subliminal signal from Zatanna and how she views Mickey? Or is this some editor fuck-up?

I did like the future seeing cat. Especially that at first Mikey was like ‘oh, cute kitty’ and then she learned better about how you treat a kitty. I mean, you can’t pet it unless it wants you too. Zatanna being annoyed was really amusing. Considering she’d usually just say, TACS TAC.

I’m not a huge fan of the Spectre. I find that he’s a hard character to be used, either things get too cosmic characters are ridiculous or they get way too serious. Here, he gets a little silly. Or at least, he’s ominous and then Zatanna’s all ‘let me interrupt.’ I did like that she turned his target into a rat, and yes, in the Spectre’s fashion, he still killed him. However, when things started going cosmic, they started getting silly. Igle’s style of art didn’t help with the silly feeling.

Brother Night’s escape was perfect. Yes, he would totally use his minions, quite literally with their bones to help him climb over the prison fence. I think it’s very interesting that Dini’s now going to explore Night’s church. And wow, Dale, the things we never knew about you.

While I’m glad to see that Zatanna is living up to her promise to hang out with Zach and do a show with him, I was rather disappointed in this comic. I’m completely cool with their siblings vibe. The whole teasing thing: I get it; I have younger brothers. That said something felt off, not quite believable. And same with the dance club. I felt like the author hadn’t been to one in a very long time. It felt dated, or like in a bad movie.

The only succubus plotline I’ve ever liked is on Lost Girl; this one with Yuki-Onna just falls into the scary vagina and helpless Zach. Boring.

The art’s also rather dated. The faces are weirdly shadowed, and again, it’s kind of like someone forget to have a real reference for what a club would look like. Or even an idea of a modified DCU version.

I really liked this as a story of Zatanna’s wit and strategy. I liked that when her vocal cords were damaged, she was able to show that there’s more to her than some backwards words that create spells. I thought that the story was really well put together action-wise. My only slight problem would be the fans coming up to her. I think they would’ve noticed that Zatanna was bleeding from her throat.

Zatanna sending back the religious witch hunters to Puritan times to have them burned at the stake — well, just enough to make them sweat — was stone cold awesome. I like giving her a harder edge. It also reminded me of the line on Bewitched when Sam reports that no real witches were burned at the stake during the Burning Times.

I was disappointed with this issue, but more for a point of ending for Zatanna’s story. I’m not sure any writer has figured out how to do an everyday kind of story with Zatanna. Even if her time on the plane, as she steered it from danger with a few words while everyone around her panicked, was endearing.

Her time chasing Uriah through her home just seemed a bit of a rehash of Oscar the puppet’s story. Sure Zatanna’s house is both a great resource for her, but also a great vulnerability when she keeps that much magic around in one place.

Ibanez’s art was okay. Not the best and not the worst, which contributed to the mediocrity of this story.

Additionally, Zatanna’s dream world of choice — though I did like that she could chose her dreams — was such a bad stereotype. You’d think a magician who’s seen different worlds and who doesn’t hang onto the idea of being normal, would have dreams that were a little more interesting.