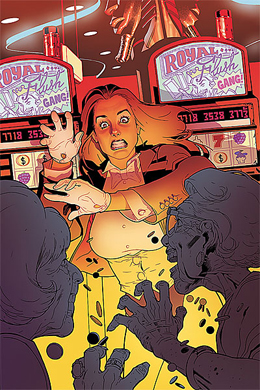 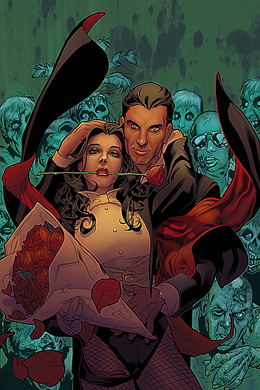 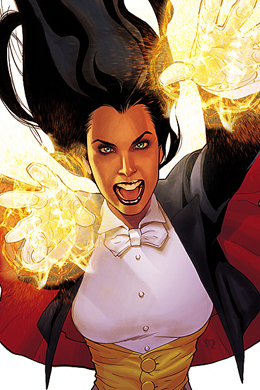 Dini’s story remains entertaining. Zatanna and her show goes on the road to Las Vegas. And she prettily easily takes down the Royal Flush Gang over the Vegas strip. Good thing they’re flying in the air on cards rather than causing chaos in the middle of the street.

We then meet her new villain, Sonny Raymond. Seems Sonny Raymond might’ve sent the Royal Flush Gang to steal his own money just so Zatanna would further trust him. (His casino’s already booked her show.) I’m always a little sad when comic writers don’t take a more stealthy position when revealing the bad guy to the readers.

I really enjoyed Zatanna with her team and her bunny, Lucky. He’s a misfit just like the rest of them. Her cousin Zach is pretty funny and young, just as a the demon women say. But I like that Zatanna has more family than just her dead father.

I do have to say that burning Zatanna’s mouth was pretty clever of those demon women.

What I really disliked about this comic was Hardin’s pencils. The more I look at them, the more awful they are. The proportions are all wrong, and his style of art is supposed to be proportional. Sometimes Zatanna’s head is smushed sideways. And her boobs seem to have a mind of their own. I was disappointed from page one where we saw Zatanna with a bad wedgie. Apparently, for sex appeal.

I feel like the art is really dragging down this book. The art is not particularly offensive. Okay, there are some misplaced, zero-gravity boobs and a wedgie here and there. It’s just not to the standard this book started with. It’s okay, and that makes me sad as Zatanna has been one of the books I’ve been most excited about.

The defeat of Mammon’s fire demons was rather cleaver. Luck is certainly on Zatanna’s side as she happens to have a swimming pool and a priest. (Granted Vegas is known for swimming pools in the desert and elopements.) And I thought it was funny that Mammon called it an old and done trick.

I really liked learning more about Zatanna’s relationship with Zach and how much he looks up to her. I liked that she admitted to not spending enough time with him. Granted, there were a lot of superhero excuses. But he is important in her life. I’m hoping that he’ll help her (not save her) from the zombies next issue.

I’m not so enchanted with the mystical romance to kill you plot with Sonny Raymond. Didn’t that last plot have to do with someone wanting to keep power and immortality? Zatanna just deserves better than to be roofied.

I’m so thrilled that Zatanna got a new artist. One who can draw proportions, and one who isn’t really into t&a. I hope that Saiz sticks around for a very long time. I think his style fits Dini’s writing really well.

The only real reason that this comic didn’t get 5-stars is that it’s Zach who wakes up Zatanna to the spell. Yes, together, they defeat Mammon, or at least run him off, but I don’t buy that Zatanna would’ve “married” Sonny until a spell. That said, I don’t know how I would’ve written it differently. I supposed that at least Zach is her cousin, not her love interest.

Raymond’s rapid aging and his being turned into gold by Zatanna seemed very fitting. And certainly much more humane than his soul being sacrificed on the alter of Mammon.

I did love the ending when Zatanna goes to see Zach’s show, because yes, she does care for his cousin. And next time she doesn’t show up, he’ll probably think twice.

Get a little magic in your life, preorder Zatanna: The Mistress of Magic by Paul Dini