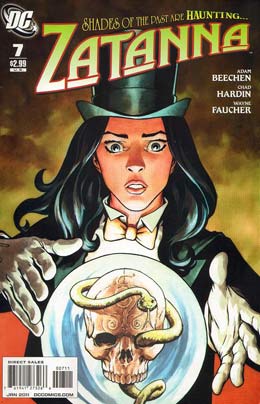 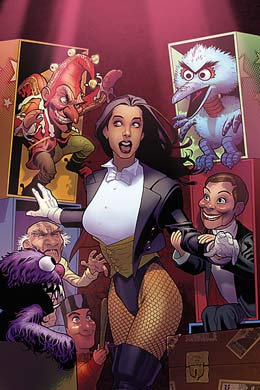 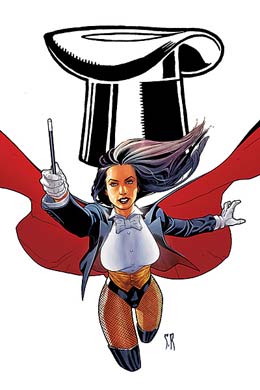 New writer. Huh. At first, I don’t think Beechen had her voice down very well. I couldn’t hear Zatanna and was about enthralled with her story as she was about Los Angeles.

I thought another plot with her father’s ghost was a little much. Though I did appreciate the twist that the magician’s clothing was a little imprinted with their spirits, but not completely. And I liked the moment when Zatanna thought Antonia was going to give her Sargon the Sorcerer’s turban, but ended up with her father’s sunglasses instead.

Otherwise, disembodied clothing floating around and killing evil people seemed a little blah to me. I’ve felt like I read this plot somewhere else, but can’t place it. Something about the pipe…

I’m also not a fan of Hardin’s art. I don’t understand why Zatanna was walking around in her costume at the beginning. People and the paparazzi were bound to notice it was her when she was stepping in her father’s footsteps in Hollywood. Seriously doesn’t make sense.

I think that I like dislike puppets as much as Zatanna, or at least human-looking puppets. I liked this story much more than expected. I’ve been enjoying the journeys in Zatanna’s past and her relationship with her father. Plus, I always enjoy a story that builds upon the details of the earlier stories, but you can read without having to read those. And can I say that I’m really excited that Dini is back, and I’m enjoying Chang’s take on Zatanna.

I loved the bit with the therapist, and her room which resides in its own special place and she changes shape in order to be comforting to her patients. I thought this was a very nice touch. Also that even superheros need advice. Puppets are indeed creepy.

I liked this as another way to connect Zatanna to her father, and how much he tried to be a good parent, but like every parent, he was only human. Though seriously, didn’t John ever watch a horror flick? Didn’t he know that locking away Oscar Hampel into one of his puppets was just going to backfire? Creepy.

I can appreciate that here Zatanna solves her problem with Oscar without violence or magic. That said, the big reveal that Oscar is not actually a murderer and John jumped to conclusions when he turned Oscar into a marionette for all eternity seemed…rather a let down.

My favorite part was Chang’s art. I appreciated that fact that Zatanna could be tied to her bed in her sleeping clothes — t-shirt and boy-cut underwear — and still be respectful of her. I’m really glad that he’s the artist on this book. I look forward to his art in future issues to come.

I had a really hard time telling how old Zatanna was supposed to be in this backstory. At times, her thought process said really young kid and other times, pure teenager. Same with the art. There’s a scene where the robber hits her and she looks like adult Zatanna. The age weirdness made it hard for me to connect with this tale and relate it to my own experiences as a teenager. And I had braces for years.

I thought the use of the speak-and-spell was cleaver. Except in that I had a hard time buying into the plot for the age-related reasons and how most braces — and the ones Zatanna was drawn with — don’t make it impossible to talk. It was nice to see her relationship with her father without all the drama from her adult eyes and him being dead.

Buy Zatanna Vol. 2: Shades of the Past by Paul Dini and Adam Beechen.